Your Gateway to crypto news and insights

1. On December 8, the US House of Representatives held a digital currency hearing, which showed a positive attitude towards cryptocurrency as a whole, which was affirmative for Web 3.0.
2. Patrick McHenry, a member of the Republican House of Representatives, said that the United States should reasonably plan regulatory measures to ensure that the Web 3.0 revolution takes place in the United States.
3. Web 3.0 is the future of the Internet and the next blue ocean of value.
4. Blockchain brings the Internet's trust layer and clear property rights, and will become an essential infrastructure for Web 3.0 and metaverse.

Particularly noteworthy at the hearing was the speech of Brian P. Brooks, executive director of Bitfury Group, a mining institution, who explained the differences between Web1.0, Web2.0 and Web3.0 to representatives and stressed Web3.0 should "return power to the people". He believes that the future decentralized Web3.0 is better than the centralized Internet controlled by the "Five Giants". Subsequently, Patrick McHenry, a member of the Republican House of Representatives, also said that cryptocurrency may have a greater impact on the future than the current Internet. The United States should reasonably plan regulatory measures to ensure the innovative advantages of the United States and ensure that the Web 3.0 revolution takes place in the United States. 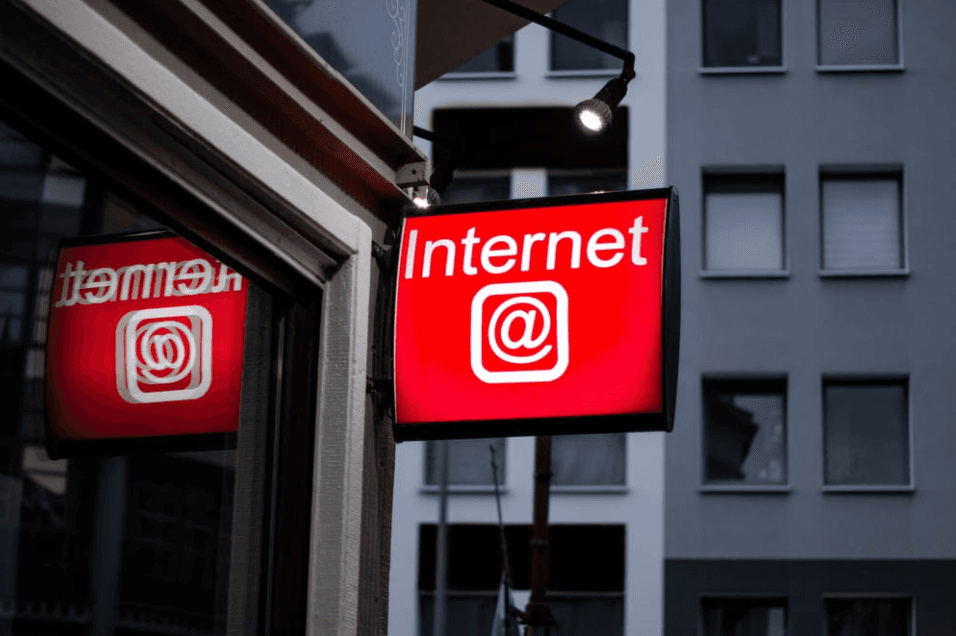 Web 3.0 is the future of the Internet and the next blue ocean of value. Its rise depends on the development of new technologies such as AI, edge computing, cloud computing and IoT. However, for the real Web 3.0, decentralization is essential. Without the revolution of blockchain technology, the Web 3.0 revolution will not happen.

Origin and Evolution of the Internet

The Internet originated in the cold war in 1969. That is, out of concern about hacker attacks, the U.S. military connects its central computer for controlling nuclear weapons with the main computers of four universities in the southwest of the United States to ensure that the defense system always works normally. This is called ARPANET. Since then, with the increasing number of nodes joining the ARPANET, the transmission of small text files between nodes has also been realized. ARPANET is the first real network using packet switching technology, marking the birth of the modern computer network.

In 1989, Tim Berners-Lee of the European Institute of particle physics proposed a protocol for classifying Internet information, which is later known as the World Wide Web. The World Wide Web server organizes information into illustrated hypertext through hypertext markup language (HTML), and uses links to jump from one site to another. In 1991, the first web page in the Internet world was born.

However, in the early stage of the development of the Internet (that is, Web 1.0), the content on the network is mainly updated by enterprises. Other individual users can only browse and retrieve information, and can not interact with the network. This makes web 1.0 static, unidirectional and rigid, and develops slowly. Until around 2004, the birth of Web 2.0 made every Internet participant become the creator of network content, and anyone can publish content on the Internet. The Internet has become an interactive network where information flows in both ways. Since then, the Internet has landed in various fields, penetrated people's lives and completely changed the world. Especially with the development of social media, everyone has become "We Media".

We have long known the story of the popularity of Web 2.0, but which direction is the next step in the development of the Internet?

For a long time, people believe that the core of the next-generation Internet is the semantic network, the machine understanding data, and the high intelligence and interconnection of all things brought by artificial intelligence, IoT and other technologies. It was not until 2014 that Gavin Wood, the founder of Polkadot, formally put forward the concept of decentralized Web 3.0 that people realized the next direction of Internet development - re decentralization.

For Web 2.0, data is the fifth largest factor of production, and users are the most valuable assets of Internet giants. These giants expand their power and earn monopoly income through monopoly data. In the era of Web 3.0, blockchain will constitute the value layer of the Internet, return the data ownership to each user, and bring "decentralization" to the Internet again. Almost every field in Web 2.0 will be rewritten by blockchain technology. Unlike before, the user always has the right to use the data, and the benefits brought by the data will really return to the user. 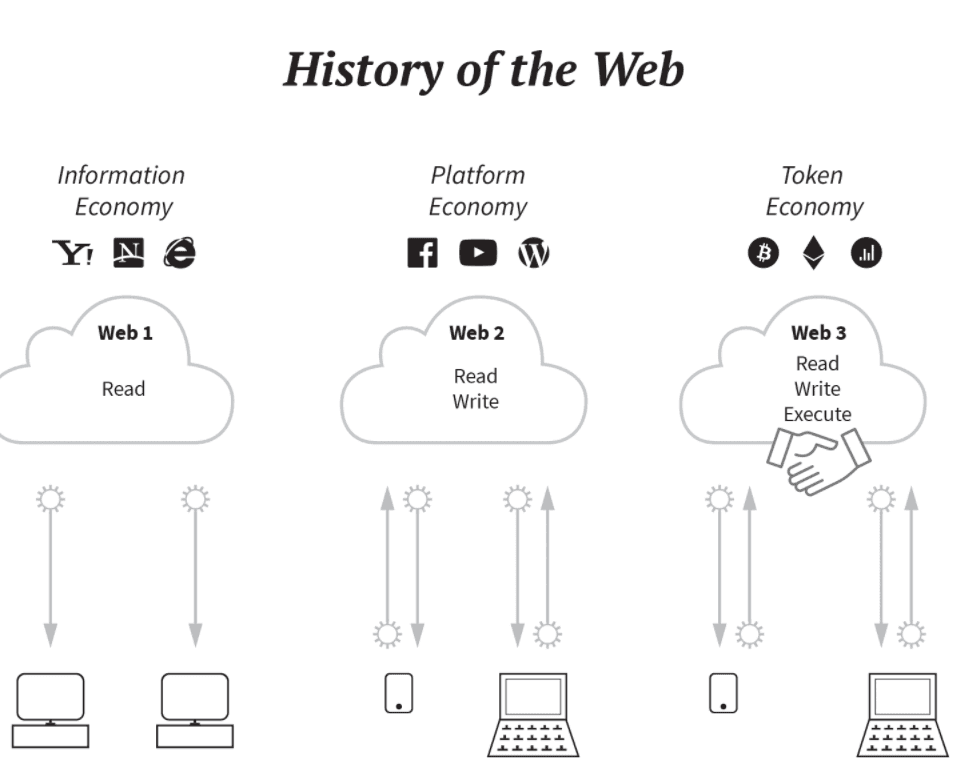 Source: The history of the web (Token Economy, Shermin Voshmgir, 2019)


In the article Web3: In a nutshell by Eshita, researcher of Messari, the evolution from web1 to web2 to Web3 is described as from "read-only" to "write + read", and then to "write + read + own". The "own" here is officially realized through blockchain technology. Blockchain has realized the expression of value in the digital world and becomes the value layer of the Internet. Various "property rights" in the virtual world can also be "quantified" by various cryptocurrencies. In addition, this clear property right will also become the basis of a large-scale metaverse in the future. Because for a truly interconnected metaverse that serves the people of the world, it is absolutely impossible to be controlled by a technology giant alone.

It can be said that the Internet was born anti- centralized, and the Internet controlled by a few institutions is a morbid state. Therefore, it is inevitable to develop from Web 2.0 to Web 3.0 and from right centralization to decentralization. At present, the influence of Web 3.0 is still small, but the voice of supporting Web 3.0 can not be ignored. In the future, Web 3.0 will become fairer, more democratic and closer to the original intention of people when building the Internet decades ago.

Author: Edward.H, Gate.io Researcher
*This article represents only the views of the researcher and does not constitute any investment advice.
*Gate.io reserves all rights to this article. Reposting of the article will be permitted provided Gate.io is referenced. In all other cases, legal action will be taken due to copyright infringement.

Gate.io Featured Articles of the Week
Is SocialFi Going To Be The Next Big Thing in the Web3.0 Era?
Summary of the First Round of Polkadot Parachain Slot Auction: What Projects Deserve Attention?
Top 6 ways for Cryptocurrency Passive Income in 2021
Share with：
Follow us：
Trending
UST Decoupled from the US Dollar and LUNA Slumped by 60%
Luna Fell by More than 95% in a Single Day. What Is the "Death Spiral" Leading to Hell?
The Whole Story of Musks Acquisition of Twitter
Luna Chain Reaction Poses Significant Capital Loss, and the Security of DeFi Financial Products Initiates Dispute
Can A Hard Fork Revive the Collapsed LUNA?
Claim 20 Point now
Exclusively for Newcomers: complete 2 steps to claim Point immediately!